For some time in this blog I have chronicled the “rise of the nones,” meaning the rapid increase of the number of people who consider themselves religiously unaffiliated. It is also what prompted me to write the book The Rise of the Nones, attempting to introduce the idea to a broader audience.

I was recently intrigued by the findings of political scientist Melissa Deckman of Washington College, who has raised the possibility that the rise of the nones may be slowing, and the overall number even leveling off. One of the key dynamics was a comparison of Generation Z to Millennials, finding that the younger generation doesn’t look any less religious than their elders.

Here is her comparison between Generation Z in 2019 (her own survey of 2,200 individuals) and Millennials in 2016 (courtesy of the Public Religion Research Institute): 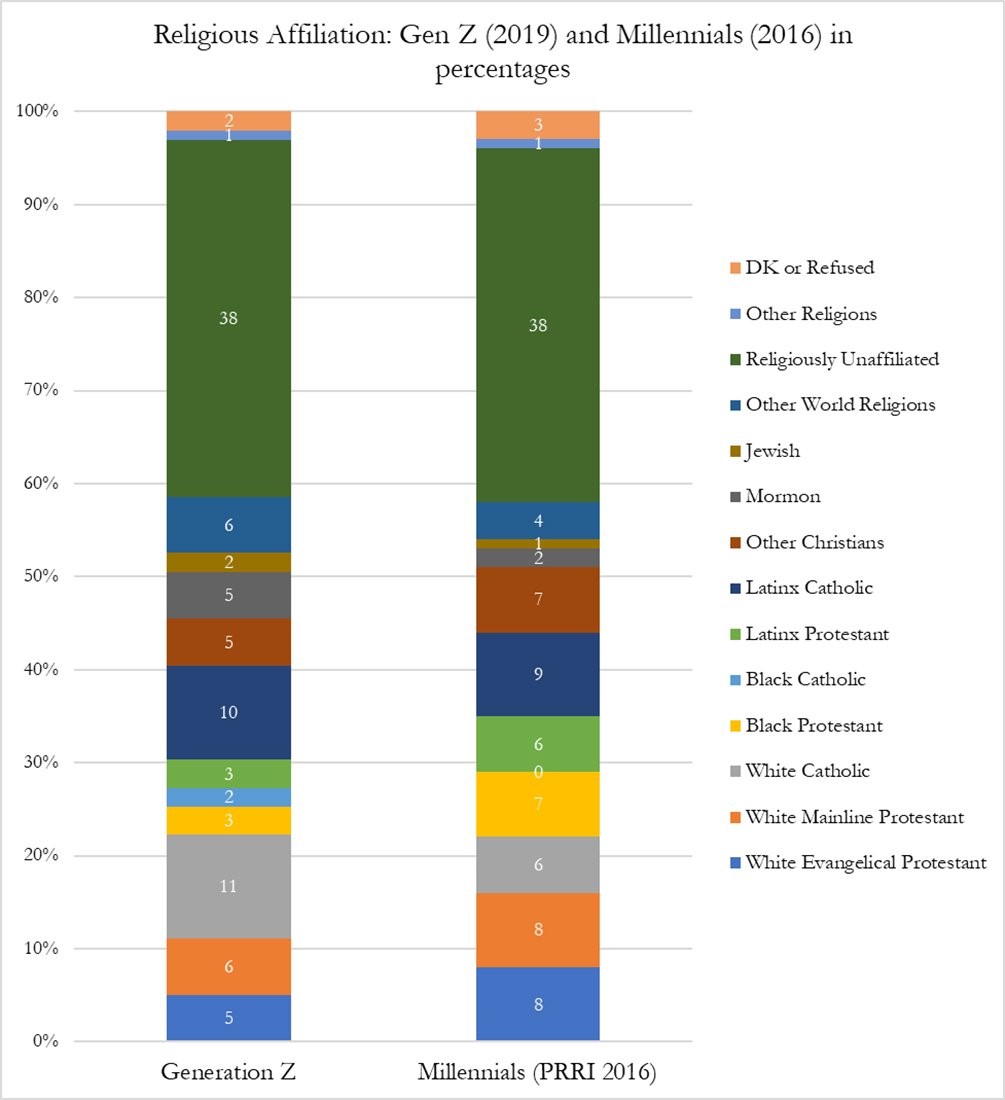 As you can see, they are virtually identical in terms of the number who claim to be unaffiliated, suggesting that with decreasing age, the percentage of nones is not increasing. This bucks the trend of the last several years that consistently showed not only the continuing rise of the nones, but also the increase in size with each successive generation.

Many reasons have been suggested for this: an increase in minority groups who are more religious; the lines of division in terms of culture wars have been largely settled, so the fallout is coming to an end; and the number who took advantage of the new social acceptance of labeling themselves a “none” has been maximized.

But this would be a very early conjecture, not to mention premature in light of the findings. It is being admitted that “the datasets are limited. They include surveys from 2018 and 2019. And there isn’t a lot of data on Gen Z because the oldest among them are 23 and pollsters generally don’t poll people younger than 18.” That is an important point. It is simply too early to know what percentage of Generation Z will eventually self-identify as nones once they are into their young adult years.

It has also been noted that the overall percentage of nones most certainly will continue to increase due to “generational replacement.” For example, only 10% of the “Silent Generation” (born 1928-1945) would place themselves in the none category, as opposed to 38% of Millennials. But as the older generations die out and become replaced by those younger, more unaffiliated generations, the overall percentage of nones will rise.

I have taken no pleasure in the rise of the nones. When it comes to preliminary, suggestive research such as this, my initial stance is to hope it’s right. To pray it’s right. Yet I confess, sadly, that everything else I survey and study suggests it’s probably not.

It reminds me of times I’ve taught on the end times, sharing my conclusion that the rapture will not occur before the tribulation, but rather right before the second coming at the end of the tribulation. Then, just as several students raise their hand to question or challenge, I always add,

“But if you disagree with me or want to argue another view, let me tell you in advance,

James Emery White, The Rise of the Nones (Baker).

James Emery White is the founding and senior pastor of Mecklenburg Community Church in Charlotte, NC, and the ranked adjunct professor of theology and culture at Gordon-Conwell Theological Seminary, where he also served as their fourth president. His newest book, Christianity for People Who Aren’t Christians: Uncommon Answers to Common Questions, is now available on Amazon or at your favorite bookseller. To enjoy a free subscription to the Church & Culture blog, visit ChurchAndCulture.org, where you can view past blogs in our archive and read the latest church and culture news from around the world. Follow Dr. White on Twitter, Facebook and Instagram.

This content first appeared on Crosswalk.com and is used here with permission. To view the original visit: https://www.crosswalk.com/blogs/dr-james-emery-white/a-slowdown-in-the-rise-of-the-nones.html

When the crowds heard Jesus was coming to Jerusalem, they cheered, “Hosanna! ” which means, “Save now!” They saw Him as their new King, come to bring salvation from political and societal oppression.